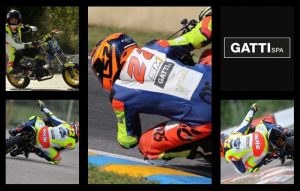 Michele was born in Inglesias on 4 October 2005, starting to ride minibikes from the age of 4.

He made his debut in 2015 in the CNV Motoasi Championship, winning all the Selective Sardinia stages in the Minimoto Polini 910 6.2hp category.

In 2016, in the Spanish Mini Speed Championship RFME he achieved a 4th and a 5th place in the Kottar Circuit and a 6th and 7th place in the Zuera Circuit in the Minigp Lorenzo Pro 220 12’’wheels category.

At the age of 11, he switched to motorcycles and attended the RFME Youth Riders Cup Championship with Yamaha R3, collecting good results.

Unfortunately, this year due to Covid regulations, imposed by the President of the Region, Michele ended the Italian Championship “Italian Cup 12 inch” in 4th place, despite he attended just 3 out of 5 races.

In the meantime, he took part in the Sardinian Championship where he defeated 4 victories, 2 in Pitbike and 2 with the Yamaha R3.

Giovanni Gatti, GATTI S.p.A President, declared: «We are proud of Michele and about his continuous victories. It shows that focusing on young people is never a mistake, it is a duty, indeed. They are our future!»

Great expectations for the 2021 with the participation in the Yamaha R3 Blu Cru European Cup! Michele, GATTI S.p.A. is ready to support you in your dream!